Okay, there are actually a few. For Candy Crowley: why did she do something that confirmed the belief that the mainstream media is in the tank for President Obama? And for the President: if Secretary Clinton really does accept responsibility for what happened in Benghazi, then why does she still have a job? Why hasn't she submitted her resignation, nor have you asked for it? (Come to think of it, Clinton isn't the only Cabinet secretary that question applies to.)

But Libya was actually covered last night. Another topic, though not nearly as relevant to the election, went without attention. Had I been in the debate hall last night, I would have memorized and asked this:

Mr. President, Governor Romney, tonight is likely the only campaign-related appearance either of you will make here on Long Island, or anywhere in our state. The nature of the Electoral College skews the allocation of your campaigns' resources to a few states that are nearly evenly divided. Though the President plays no formal role in the Article V amendment process, if elected, would you lend the weight of your office to some kind of Electoral College reform - perhaps a national popular vote, nationwide application of the Maine-Nebraska Method, or something else?

The Maine-Nebraska, or Congressional District method, was originally my first choice for a revised Presidential election method. Having looked at that Wikipedia article, proportionality by state might be a better way to go (while maintaining the present distribution of electors to each state). That would seem to eliminate the drawbacks of the winner-take-all method, while at the same time prevent state politicians from meddling in the system though gerrymandering and give third parties a credible shot, which the current system does not. Most importantly, it could give candidates some incentive to stump in states generally considered "safe" for the opposing party - and at the same time, provide the people of Ohio, Virginia, and Florida some much-needed relief from election fatigue.

I've come to the opinion that whenever anyone, anywhere, utters or types the phrase "damn you auto-correct!", what they're really saying is "I failed to proofread before I hit 'send.'" I kick myself mentally when I make a mistake of that kind, and I'm not particularly sympathetic to that excuse, whether or not the incorrect communication is sent from a mobile device. Nor am I exactly impressed when obvious errors make their way into things sent with the official imprimatur of respected institutions.

And so, I present to you the relevant parts of two e-mails I received today. The first comes from Hofstra, riding high off last night's debate. It boils down to "wasn't that awesome? Doesn't it make you want to give money?" Here it is: 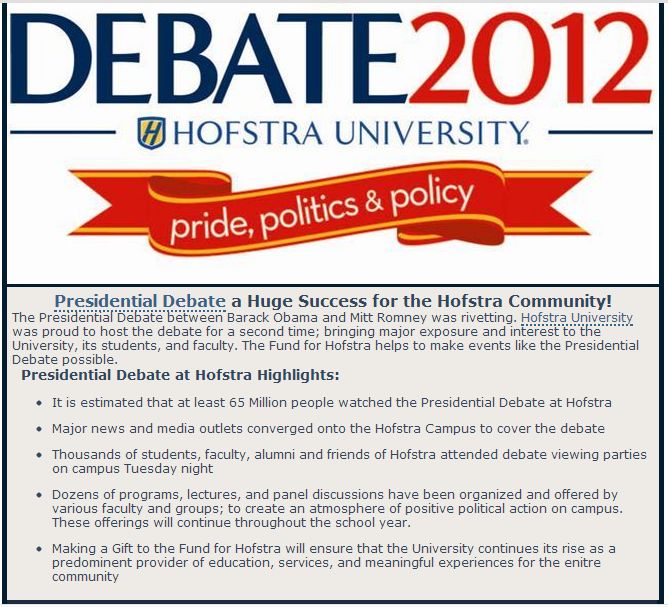 Let's leave aside the fact that, according to that New York Times piece I referenced in passing yesterday, Hofstra itself bore very little of the cost associated with hosting last night's showdown, with most of the money being fronted by Trustee (and Chairman Emeritus, and by 2030, namesake of 50% of all buildings on campus) David S. Mack.

"Rivetting." "Predominent." "Enitre." All three errors appear in an e-mail that is not only asking for money, but one that went out around a quarter after one this afternoon - in other words, not in the heat of post-debate euphoria.

Two hours later, another e-mail crossed my screen, this one about the Sy Katz parade incident to the Cornell at Columbia football game on November 10. That e-mail had the following image on top:

That's a wonderful image; it doesn't get much better than Bones on parade down one of the most famous streets (Fifth Avenue) in one of the world's most famous cities (New York). But the text is just flat out wrong. Like most college football conferences, the Ivy League only plays a single round-robin, and thus the site of the Cornell-Columbia game alternates between Schoellkopf Field and Robert K. Kraft Field at Lawrence A. Wien Stadium at Baker Athletics Complex. (Yes, Columbia does indeed have THREE layers of naming for its football field.) But back to the point: Cornell visits Columbia in football every other year, and so the parade is BIENNIAL, not annual. Of course, this slight looseness with the language doesn't change the fact that the Sy Katz parade will feature its usual high level of awesomeness - and I look forward to being there in three and a half weeks to contribute my own personal flavor of awesome* to the proceedings.

* To be very clear about this, "my own personal flavor of awesome" ≠ "any sort of drunken antics."
Collapse