I've been meaning to write this post for several days, but I'm glad I waited, because there have been some recent relevant developments, and being as today was an unintended rest day, it's a good day to hit the blog box and write.

Distance. As had been the case before going to Ithaca for Bonecoming, I gradually ramped up the distance of the daily walks. I was using a "reverse band method." Since nobody but me knows the meaning of that phrase, it requires an explanation. I mentioned in passing several weeks ago that in the Big Red Marching Band, when something is done twice, it becomes tradition by definition. In my walking, once I did a route twice, it was time to tweak it, adding or subtracting a curve or dead-end or something else to up the length a bit. I did this more than twenty times between late August and last Sunday. But five days ago, I decided to level off at nine miles per day. I felt sure that the returns from the added length were diminishing, and two and a quarter hours per day was plenty of time to put toward this endeavor. (And two and a quarter hours represents a lot of progress; at early September speeds, it would be two and a half or more.) The course I use has a fair amount of climbing, sidewalks and controlled crossings, and passes the library about halfway through, allowing for a pit stop and water refill as necessary.

Speed. As I implied just previously, it has risen considerably as I've done this. Here's a chart: 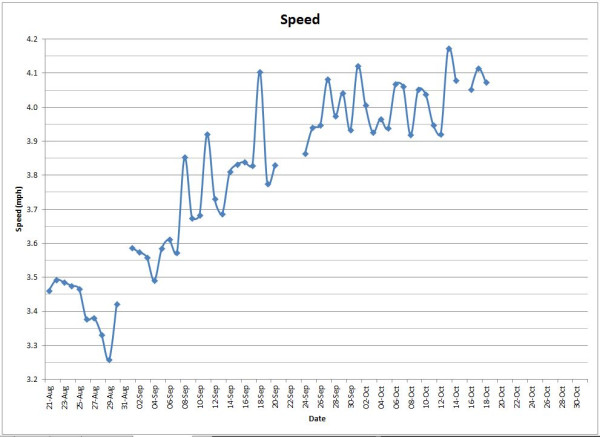 Rest days. I walked for twenty-one consecutive days before three days off while I was upstate. After returning, I did another twenty-one consecutive days. going into this past Monday, the weather initially didn't look good, but the forecast improved and a weather window opened up. There was a big part of me that was ready to go. It was that Sunday night that I saw this post in my Tumblr feed. I read it, re-read it, recalled the slowly increasing soreness in my legs, and resolved that I would put a zero in the spreadsheet cell corresponding to October 15.

That was an intended rest day; at the top, I said that today was an unintended one. I expected that to be due to the weather; as I woke this morning, the forecast called for unrelenting rain throughout the day. But I glanced out my window around 1:15 and saw no water falling from the sky. A check of weather.com revealed a sufficiently long window of dryness. All, right let's suit up and — fuck! We're suspended indefinitely, because for the second time in three months, the house's water heater failed. If I go, there's no possibility of a hot shower upon my return. The earliest resolution would be early this evening, as my parents called over the on-staff plumber from my father's job. (At least this time it got looked at the same day. When this happened in July, Dad was away, so Mom sat on the issue for a couple of days until he returned and could get a hold of that same plumber.) I set up for a possible night walk, but given the relatively short time between failures, I suspected there might be something more seriously wrong - and that suspicion was confirmed when I was told the water heater would have to be replaced tomorrow.

Diet. Back in the first entry on this topic, I wrote the following:

I decided to put any food-related changes on the back burner. For one, it might require the acquisition of skills that I don't presently have. And for two, I have largely the same diet as I did three and a half years ago, when my weight was at the top end of normal.

That's not entirely true; I was referring to my lack of cooking ability, and intended it to mean that I wasn't changing my diet by substitution. The bulk of what I eat, which includes more than my fair share of fast food, would remain in place. Change by elimination, by contrast, was very much a viable option, and to a good extent was implemented. The first easy change was cutting out the beer during the week. Even if I consume a twelve pack of Samuel Adams at two per night for six nights, it still contains roughly two thousand calories. The second modification was cutting out my favorite snacks after dinner. Saltines, peanuts, potato chips (Lay's Barbecue AND Pringles) — sayonara. Shortly after I got rid of the last of those snacks, a hitch in the plan appeared. Either or both of these changes had an unintended side effect — my long-standing aversion to early and mid-morning largely diminished. This has the benefit of opening up additional daylight hours for activity (in fact, most of my walks are now taken before lunch). It has the drawback of making me hungry in the morning, and having eaten two meals a day for many years, threatens the energy balance I've been trying to establish. Fortunately, the solution was in my own past: strawberry Nutri-Grain bars. Low calorie content plus enough food to quell early hunger is most welcome.

Results. The first half of the month tried my patience with my process. The numbers on the scale hadn't been moving downward as fast as they had in September. I was stuck on 192 pounds for several days, a loss of less than two from the start of the month. While I was taking Monday off, I did some calculations in the spreadsheet, and discovered that despite having stalled out a bit, the longer term trends still looked very good (fluctuating around -1.7 pounds per week).

And this week, the body seems to be out of neutral. I broke below 190 on Wednesday, and hit 188.8 today. That represents about 18 pounds off since August 7, and has me on pace to get down to (or perhaps below) 170 by the end of 2012. That would be most excellent, as my major target number is 167.8, which corresponds to a BMI of 25 for my height. I'd like to reach that number by year's end or shortly afterward, but not doing so won't be a disappointment by any means. The numbers—both the ones on the scale and the ones Excel spits out—are validating the work I've done, so all I have to do is keep at it, and having become so habituated to both the walking and the diet changes, that feels pretty easy at this point. That is to say, it'll be easy once a new water heater gets installed.
Collapse