The response of government at all levels to Hurricane Sandy is not immune to criticism. However, this isn't the best way to put your message across: 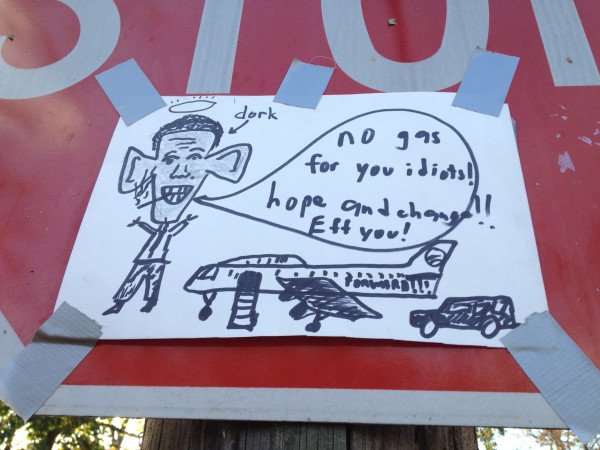 A couple of friends on Facebook have asked good questions. Is that supposed to be a halo above the President's head? Is that a toothpick in his mouth? And are those MC Hammer pants he's wearing?

The idea that Obama doesn't care about the suffering of people in the tri-state area is ludicrous on its face. But something like this shouldn't be allowed to detract from the serious questions that should be asked about the response. As sure as the sun rises in the east, The New York Times ran a "we told you so" editorial on the heels of the storm, saying that recovering from events like Sandy is one of those things the President says we can only do together. A "public good," to use the economics term. The Lee Corso style "not so fast, my friend!" comes from Tad DeHaven, reminding us that there are significant qualms with the FEMA-centric approach, both moral (why should residents of the Rockies pay for this, and we for their wildfires?) and practical (government action is slow, and subject to political pressure).

I'm not using my NYT articles for just anything, and Paul Krugman's columns fall under the definition of "just anything." But I do experience them through a filter, and last night, Dr. Anderson wrote about the dissonance between Krugman's treatment of FEMA now vice after Hurricane Katrina. Hint: it might have something to do with the change in control of the executive branch.

Mark Steyn hits both President Obama and Mayor Bloomberg in The Orange County Register. Perhaps it's a stretch to compare the handling of Sandy to the handling of the embassy in Benghazi? Regardless, he's dead on regarding Hizzoner. That paragraph about Bloomberg is totally on point, especially its closing line: "[w]hen the going gets tough, the tough ban trans fats." He defends New York City residents against ounces of soft drink, but feet of storm surge - not so much. And Steyn's column was published last Friday, so he doesn't even deal with the mayor's initial insistence on pressing on with the ING New York City Marathon - and then reversing course on Friday night, after many runners had already made the trip to the Big Apple. Bloomberg compounded that error by thinly veiling his disgust at the public outcry, saying that the marathon had to be canceled because it had become "divisive," and not because it diverted needed resources. Rudy Giuliani's comparison to 9/11 is inapt. There were nearly two months between that horrific event and the 2001 NYC Marathon. That year, the Great Cow Harbor 10K Run would have been run four days after the attacks - and it was canceled without a second thought.

I have taken what steps I can to conserve gasoline, as I don't want to involve myself in the struggle to refuel - "that Lord of the Flies shit," as I've referred to it more than once. Though I'm a proponent of the force of markets wherever it can be harnessed, I think there's a good case to justify some of the measures we saw late last week, but that the arguments no longer hold. If more gas can't be brought in and can't be sold to customers, freezing the price and limiting purchase amounts (as New York State and Suffolk County did, respectively) may do more good than harm. But enough of the transportation and electrical infrastructure have been repaired so that raising prices can be rationally responded to by both consumers (lowering demand) and producers (bringing more fuel to the market here). Here's a fun little reason.tv video about the gas shortages in Brooklyn.

Finally, our local schools. They wanted to open today, and broadcast that intent to parents. Said parents: NOT enthused about this prospect. A few said it was the right call, and that carpooling could and should be employed. They have a point, but on the whole, having parents all bring their children to school would create a clusterfuck at each of the nine school buildings. Those nine clusterfucks were averted at 4:30 pm yesterday, when the district reversed its decision and closed the schools today and tomorrow, after learning that the state doesn't allow districts to open and not run buses. Regardless of the wisdom of opening, not confirming the legality of doing so is a fairly stunning show of incompetence.

Enough about Sandy; quickly, on the election. Everything will be pretty much the same when we wake up on Wednesday morning. I expect that to also be the case politically; the White House and Senate will remain blue, while the House of Representin' stays red. Of course, the polls can be wrong from time to time; witness the United Kingdom twenty years ago. But in the United States in 2012, the occupant of the White House come January 20 doesn't matter so much, as there's a whole slew of unfortunate directions we're heading in where the two main candidates are in total agreement.
Collapse