Last time around, I mentioned my brother had moved to the West Coast. Strictly speaking, that isn't technically true. He's an hour inland, having landed himself in Corvallis, Oregon. When I unexpectedly saw him at Thanksgiving in Greenlawn, he mentioned that I would need to rent neither a room nor a car should I decide to trek west for a visit. I tossed that idea around in my head, until realizing... I've got a ton of reward points available to me! After looking at various itineraries, I booked one that I thought would work well within my schedule, while still ensuring that I'd pay zero dollars out of pocket (for the airfare, that is - still paid to check a bag).

And so, last Monday, I flew PHL -> MSP -> PDX. It wasn't without difficulty. Once I'd packed my seabag, I tried to lock it... but it failed to lock. I had to detour on my trip down to the airport to buy a luggage lock, leading Delta to declare that I was checking my bag "late"; running that through the Airline to English translator yields "45 minutes early." They told me it might not arrive when I did; I walked away from the counter chalking that up as merely some kind of scare tactic to get me to show up earlier next time. The layover in Minneapolis-St. Paul just added to the fun. I thought 43 minutes would be sufficient to grab a bite and connect. In related news, I fly quite rarely, and not in over two years prior to last week. Hearing my last name and the words "final boarding call" while I'm walking down a conveyor belt for humans definitely finds a way of putting a spring in your step. One of the unexpected highlights of the trip came right off the bat; just after touchdown, my brother let me know that my half-brother wanted to have lunch with us. His choice of venue - Claim Jumper in Tualatin - was spot on, although it felt like dinner to me, as the food was set down about 3:30 Pacific time. I was wiped and so I slept most of the drive down to Corvallis.

While down there, I got the chance to explore a little bit, insofar as the immediate Corvallis area offers. But I did end up spending a lot of time camped out and relaxing at the house my brother and a friend of his have rented, where two more of his friends will join him early in the new year. I learned that John is a massive History Channel junkie. I was cool to The Curse of Oak Island, but the show that really got him going was Hunting Hitler. He got me caught up before last week's new episode. I thought the series was well edited for dramatic effect, but my evaluation of the fruits of the search turns heavily on what burden of proof you apply to Bob Baer and his team. If it's the criminal standard of "beyond a reasonable doubt," then one must find for the settled history (Hitler died in the bunker in Berlin). But on the civil standard of "preponderance of the evidence," they might carry the day, although given that P(Der Führer lives) < .001, I'm not sure how much it matters. Try him in absentia? Given we have much bigger fish to fry, why? Speaking of those fish - my brother's on the left, I'm on the right: 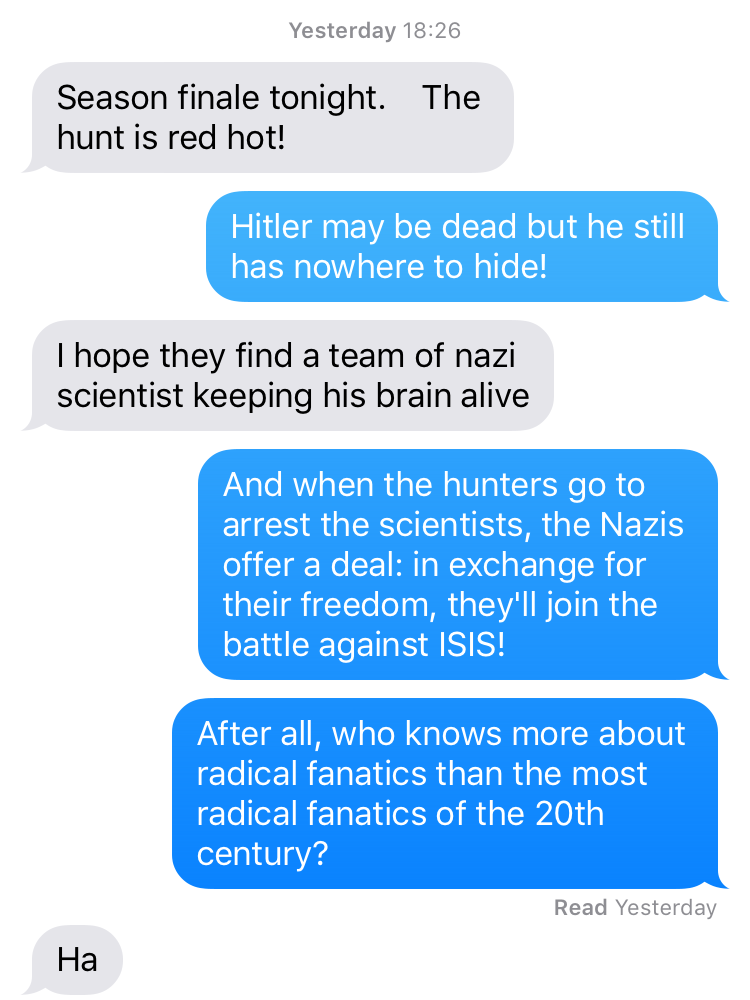 (That was a few hours before last night's finale.)

John could not have been a more gracious host. Two weeks before I touched down in Oregon, he exhibited class by not trash talking until Josh Brown's kick sailed wide in overtime. (He's a Jets fan.) He indulged my craving for Jeopardy! each weeknight (delaying as necessary for football or the aforementioned Hunting Hitler) so that I wouldn't be behind when I came back east. He set us up to see Star Wars: The Force Awakens. I enjoyed it more than he did; he pegged it as too derivative of A New Hope and Return of the Jedi. As everything closed up on Christmas Eve, he delivered delicious chicken parm, in honor of our late parents' traditional Sunday dinner. The next morning, as we lazily watched Die Hard, he served up a tasty surprise: chicken and waffles for brunch. That being so, we resorted to cultural appropriation a few hours later, ordering in some Chinese for dinner.

The twenty-sixth dragged, especially for me, toward an absolutely ugly NFL matchup - Washington at the Eagles. I was in the hellish position of having to drop my resistance to the Eagles fandom, as they needed to win to give Big Blue even the slightest chance to win the NFC East. As the game clock at Lincoln Financial Field closed out the division title for the Snyderholes, the clock had already run out on my time in the Beaver State. As we left Corvallis to ferry me to PDX, my flight out had already been delayed nine minutes. When we took the exit off Interstate 205, it'd been delayed another twenty. That put me in a perfect position - plenty of time to clear security theater and find some beer and food, and plenty of time to make the connection. On the drive up, I'd researched food and drink options in Concourse D; I was intrigued by the Rogue Ales & Sprirts. After the government was through with me, I found my way there... right next to the gate! SCORE! Two tall drinks and a chicken finger platter eased the way... until the time on the board changed from 11:25 to 11:55. Even then, I knew I'd be in trouble on the back end. Not the kind of thing you want to be worrying about on a red-eye, when you want to be sleeping. And I was most certainly awake for the full duration of the return trip. An unexpected upgrade to "economy comfort" sustained me, as did the chance to correct a mistake from the summer - I caught Trainwreck, led by the amazing Amy Schumer. But I spent the second half of that flight checking, rechecking, and checking again the gate assignment of my connecting flight...

... for very good reason. The delay out of PDX had cut my layover to twenty minutes. I retained vague familiarity with DTW, having driven to it from Findlay many times as I interviewed for my current job. When I saw the gate for my connection, I knew it would be hella close. The flight crew was on point with the announcements - paraphrasing: "if you're getting off here, or if you can take your time, sit the heck down." I could do neither of those things. Emerging from gate A72 at 7:00 Eastern time gave me a brief flashback, quickly replaced by the need to reach A25 - and with a quickness. I sprinted. I used the conveyors. I walked quickly. I used more conveyors. I glimpsed A25... plane still there! A shot! I reached the counter, thrust my boarding pass at the attendant. She goes down the jetway... nothing. She calls somewhere... asks whether I have roll-on bags... I don't. Like Link with the magical key, the door opens for me! I collapse in my seat...

... only to endure an hour ground stop. The weather in Philadelphia prevented anybody from taking off or landing, so we'd have to wait. Fortunately, it was only an hour. As I walked off that flight and through PHL's Concourse D, I knew I'd need a boost. In 1987, it was called "liquid Schwartz"; nowadays, we call it 5-Hour Energy. It was indeed enough to get me to my "new" car (hold on, I haven't mentioned that here yet) and back to Phoenixville. I was a shell the rest of the day, which is just as well, as it gave me an excuse to turn off that horrific Giants-Vikings game halfway through the third quarter.

I awoke Monday morning somewhat refreshed. Hadn't completely acclimated to the time change back, but had done enough to get through a test and a scenario. But as our planet approaches the arbitrarily determined start/finish line of its orbit, I feel ready to take on what 2016 is going to bring on. And it starts early - our NRC exam will conclude before January does.

In 2015, I broke a good habit by barely posting here at all. I hope to re-break that habit in this year that will see me to three and one half decades. As for whatever else I can do to improve my life? Perhaps a piece of property, or someone to share this... or both? That's up to the Fates and me to determine.
Collapse