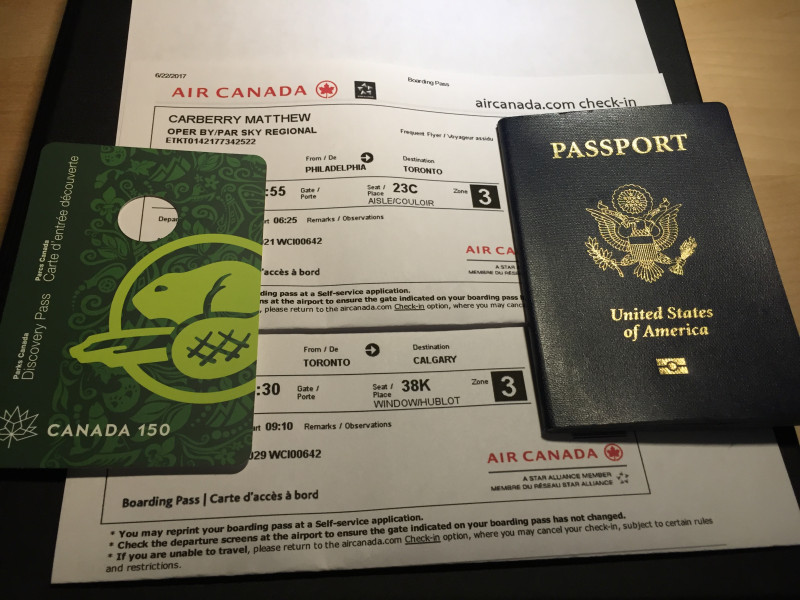 It couldn't have been too long after I got back from Canada in September 2016 that the work schedule for this year was released. Five operating crews keep Limerick Generating Station safely generating power, and so our shift rotation repeats on a five-week cycle. One of those five weeks is a training week, but we don't have training in all of those slots. And it so happened that our schedule aligned with my hopes, in that we wouldn't be spending the week of June 26 in the simulator. That meant getting vacation approved for that week would be a breeze, and that I could easily schedule another trip to visit our wonderful neighbours over two weekends. The second of those weekends was of particular importance, as it was the weekend that Canada celebrated the sesquicentennial of its Confederation. That'll be recounted in the second part. Here, I set down the first four days of the trip, where I visit a province I only scratched the surface of eighteen years ago...

I had trouble sleeping on the night of the 22nd, being so damn excited to get this vacation underway. That trouble didn't deter me from making my flight, nor did it detract from the feeling that I had to be on my "A" game upon touchdown at Pearson. For one, I had only a little more than an hour to make my connection to Calgary, an interval during which I would have to satisfy the Canada Border Services Agency. Speaking of which — for two, I remained most acutely aware of my subjection to secondary screening upon my arrival at Stanfield in September 2016. Multiple sighs of relief were exhaled when the process went much more quickly and smoothly on this trip. I did get a bit of shuteye on the flight across the continent; combined with the anticipation of ten days of possibility laying before me, I didn't need much of an energy boost. 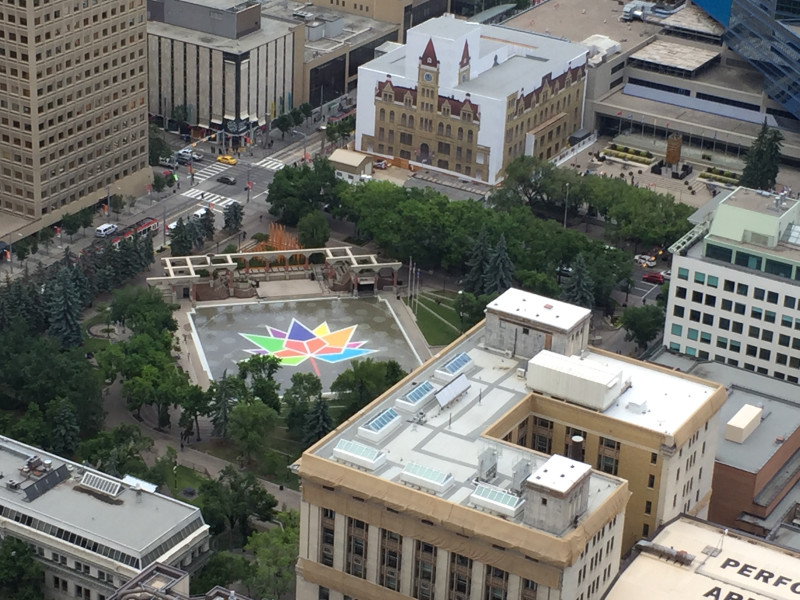 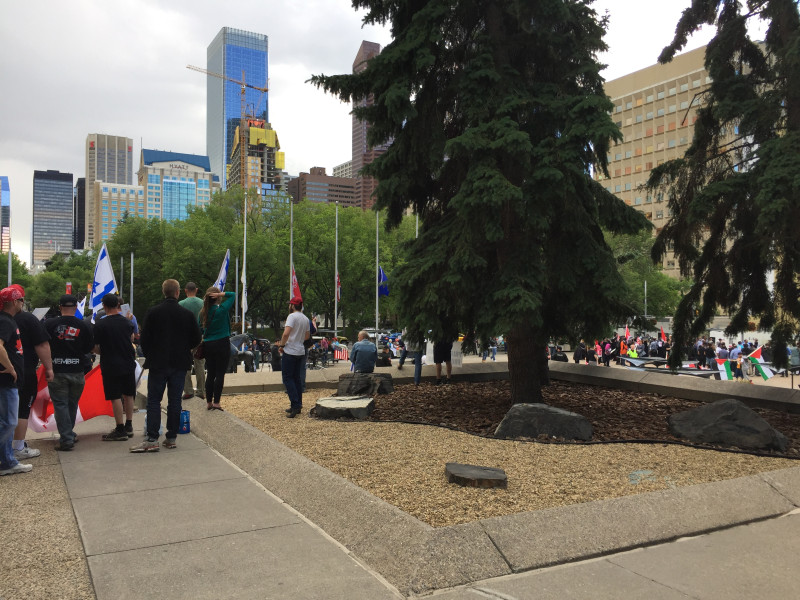 I checked out Nose Hill Park before heading first to Fort Calgary, and then downtown. Once there, I took a walkabout, which led me to Olympic Plaza — whereupon I heard what seemed to be dueling chants. I walked eastward wondering what was going on, and my eyes confirmed what my ears had told me — pro-Israel and pro-Palestine groups were holding peaceful demonstrations at opposite ends of the plaza in front of City Hall. At one point, I was approached by a member of the Calgary Police, asking me if I had a dog in the fight. I assured him I did not — and at that, I believe he suggested where I might be safely able to get pictures of these events. After a quick jaunt to the top of Calgary Tower, the rest of the night was relatively uneventful — dinner, Jeopardy!, down to 17th (aka the "Red Mile" when the Flames are successful) for drinks and revelry, and then back to the hotel. 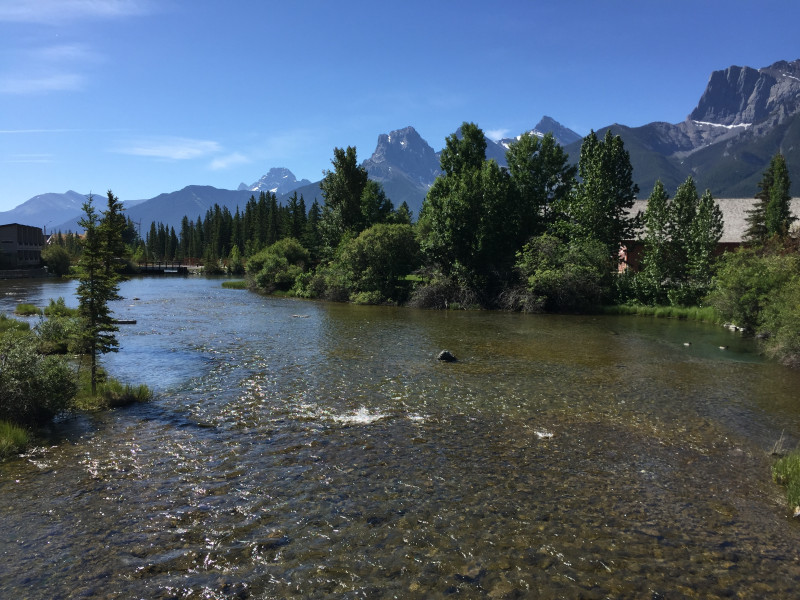 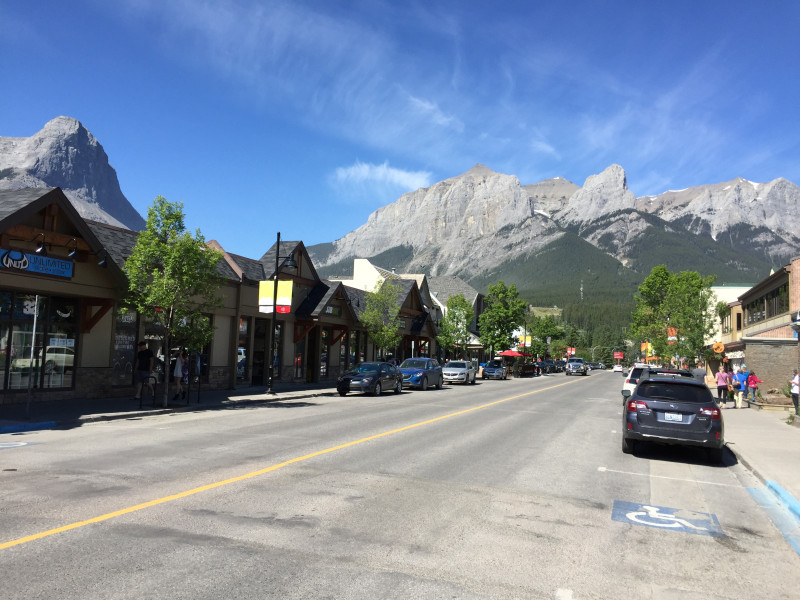 I shared the breakfast table the next day with a group of fellow Americans — including one who had recently been discharged from Recruit Training Command, Great Lakes, which gave us a nexus that sustained a few minutes of conversation. They were to my left — and to my right was a copy of the National Post, with a particularly trenchant article by Jonathan Kay on the front cover. Even after I'd finished eating, I took the time to read the whole thing. I then made my way to Canada's Sports Hall of Fame, where I gained a great appreciation of the country's sporting culture. While I was none too pleased at hearing and seeing Sidney Crosby beating Ryan Miller in 2010 on what felt like a continuous loop, I can certainly understand why that would be played up. From there, I drove about an hour west to Canmore, an amazingly beautiful little town just past the entrance to the Rockies. When I booked the accommodations for this trip, I thought Canmore would be a step down from Banff, where it seemed everything was booked... was I ever mistaken on that point. Easily walkable with stunning scenery, I ended up not leaving until early Sunday afternoon, well after I checked out of my hotel. Nor did I do so bad for myself the night before, with a dinner at The Grizzly Paw followed by a couple of hours at Tavern 1883.

Once I finally did leave Canmore, I headed first towards Banff, and then on to Lake Louise. This being the height of tourist season, there were buses running from an overflow lot a few kilometers away, but I was fortunate to get a parking spot adjacent to the lake. I lingered there for more than a little bit, because while the pictures may tell a story, they don't quite do the place justice. From there, it was onto the Icefields Parkway toward Jasper. Eighteen years earlier, my family drove this road on the way to Alaska, taking this particular stretch quickly and under cover of night. I corrected both those missteps on the afternoon of June 25, making many stops along the way to grab pictures. By the time I reached the town of Jasper, it was past eight o'clock — and I still had to gas up, get something to eat, and drive another hour or so to my hotel in Hinton. In addition to accomplishing those objectives, I noted the VIA Rail station, and how the history of the railways is the history of the country, especially in this province. Though I had a hot tub in my room in Hinton, my late arrival left me able to do little more than sleep, as I had a few hours' drive ahead of me the next day. I reached Edmonton around one in the afternoon, which presented me with a dilemma — how to kill the twelve hours until my flight to Pearson, connecting to Stanfield. A lot of that time was spent simply driving around the city. Somehow, my travels did not bring me to the West Edmonton Mall, the largest shopping centre on the continent. But they did bring me past Commonwealth Stadium, home of the Edmonton Eskimos and a stop on the USNWT's "Settling Accounts Tour 2015"; the Northlands Coliseum, where the Greatest Canadian Ever (so it seems) ended the Islanders' Drive for Five in 1984; and the majestic seat of the Legislative Assembly of Alberta, where temperatures nearing thirty degrees made everyone quote comfortable. The next thing in my mind was a search for a reliable connection to Edmonton's public WiFi, which would enable me to remain caught up on America's Favo(u)rite Quiz Show. A trip down to Rundle Park, while lovely in and of itself, proved inadequate. Rerouting to the vicinity of the Kinsmen Sports Centre did the trick, and Jeopardy! in the park was quite the experience. But the events between my departure from there and my arrival at YEG constitute one of, and perhaps THE, signature moment of the trip.

Having taken dinner at a brewery on each of the previous three nights in Alberta, I saw no reason to divert from that course. My search at Walterdale Park identified the nearest such establishment as Situation Brewing, on Eighty-first Avenue. After parking and finding my way to its front door, I noted a particular sign on a nearby office: "Rachel Notley, MLA — Edmonton-Strathcona." A fun offshoot of the trivia fandom is getting up to speed on the politics of places I go. (For example: at this juncture, preparing for my next trip, I likely know more about Jacinda Ardern than the vast majority of Americans.) Thus that name rang particularly in my mind as I sought and obtained beer, food, and company. As I did, I struck up conversation with two lovely ladies — one of whom engaged me more deeply than I ever expected to be on vacation. Among the topics covered: the aforementioned Premier and her future prospects; supply management, Scheer, and Bernier (this being only a month or so after the CPC's leadership election); and the political climate on our side of the border. It was wide ranging and engaging. We agreed on a lot of things, while respectfully disagreeing on some. Perhaps the conversation flowed more easily on my end because of the very fact that I had a "hard out," to use the show business term — I couldn't stick around much past ten o'clock, having a flight to catch. It was a great close to the front end of my trip; another couple of beers inside the Edmonton Airport and a change into the comfy clothes got me ready for the seven actual hours and three time-zone-lost hours of the transfer to Nova Scotia...
Collapse