Part I was the tale of the Big Red Band securing a new building for itself, with ground being broken three months ago. This time, it's my other main extracurricular endeavor during my time at Cornell: WVBR-FM Ithaca. I started doing sports there in February 2000. Three months later, the station's location on Linden Avenue got tagged with this, just as spring finals were getting underway: 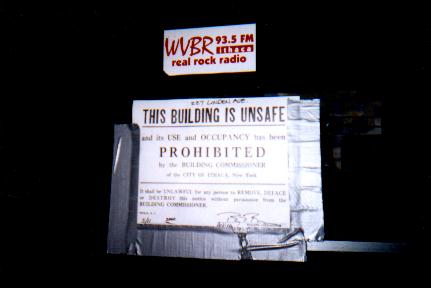 After a crazy couple of weeks (or so I remember being told; I was still very junior, plus I left campus a few days later, after my finals were done) WVBR secured space near East Hill Plaza, in the headquarters of the New York Holstein Association. It came to be dubbed "the Cow Palace." It was supposed to be a temporary solution. A year went by there. That year became two, then five, then ten, and it's now been twelve and a half. I had just presumed that remaining there was a settled question.

Today, I happily learned otherwise. When I received the envelope with "Cornell Radio Guild, Inc." in the return address, I had no idea what lay inside. I certainly was not expecting to see this: 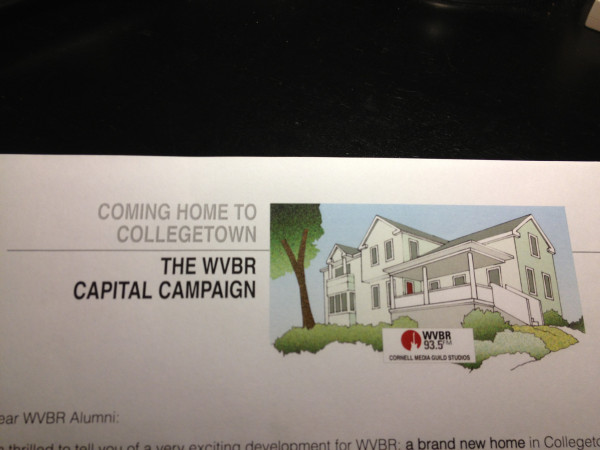 Firstly, I have to commend WVBR's staff on their OPSEC, to use a military term, for keeping this under wraps while moving the process so far along (according to the capital campaign's site, they're near closing). I like the new location; it may not be particularly close to the freshmen now that they're all up on North Campus, but it's a hell of a lot more convenient than the Cow Palace is. It's right near the Chapter House, so those who are of age can celebrate another successful Sports Roundup (or any other show, I suppose) by popping in for a cold one. And as the announcement letter states, it'll give the station the space to expand its offerings into the digital world.

I've only got a couple of qualms. For one, this would have been a hell of a lot more convenient had it happened in 2000-01, the first school year after it happened. I lived only two blocks away from this building at that time. And the second... well, it doesn't translate so well if you don't know the context. Regardless, I'm excited. Now I just need to hear back on these jobs I applied to and interviewed for. Perhaps if I get one of them, I could give more money to a great cause like this.
Tags: cornell, wvbr
Subscribe